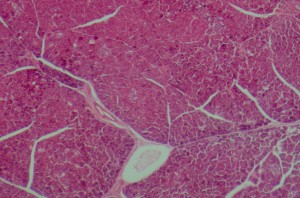 Cancer Research UK scientists have shown how switching off a key protein in pancreatic cells slows the spread of the disease to other tissues, a key step which can mean patients have just weeks to live.

The study, published in this month’s issue of Gastroenterology, provides some of the first insights into how elevated levels of the protein ‘fascin’ help cancer cells penetrate the tightly packed cells lining the abdomen.

Pancreatic cancer is difficult to treat because patients don’t usually have symptoms until the disease begins to spread. As a result survival remains low, with only around 4 per cent of patients living more than five years.

Study leader Dr Laura Machesky, from Cancer Research UK’s Beatson Institute in Glasgow, said: “We know fascin is overactive in many cancers, but this is the first time we’ve been able to show that tumours lacking this protein are less able to develop and spread. What’s more, we found pancreatic cancer patients with ele-vated fascin levels were more prone to the cancer coming back and tended to succumb to the disease more quickly.

“It’s early days, but we think that developing drugs to block fascin could potentially help halt cancer spread in patients with pancreatic cancer, and other cancers with higher levels of this protein.”

The researchers studied human cancer samples and mice predisposed to get pancreatic cancer. They found that when fascin was absent, pancreatic cancer was less able to spread around the body. In mice, this delayed the onset of the disease and resulted in smaller tumours.

Eleanor Barrie, senior science information manager at Cancer Research UK, said: “This new discovery paves the way for new drugs that could potentially slow cancer spread, reducing the chances that cells left behind after surgery could go on to re-grow the cancer. Pancreatic cancer is notoriously difficult to treat — less than four per cent of patients survive for five years or more, a situation that has seen little improvement in recent decades. We’ve recently announced increased funding for research that will give patients like this with hard to treat cancers the hope of a much brighter future.”